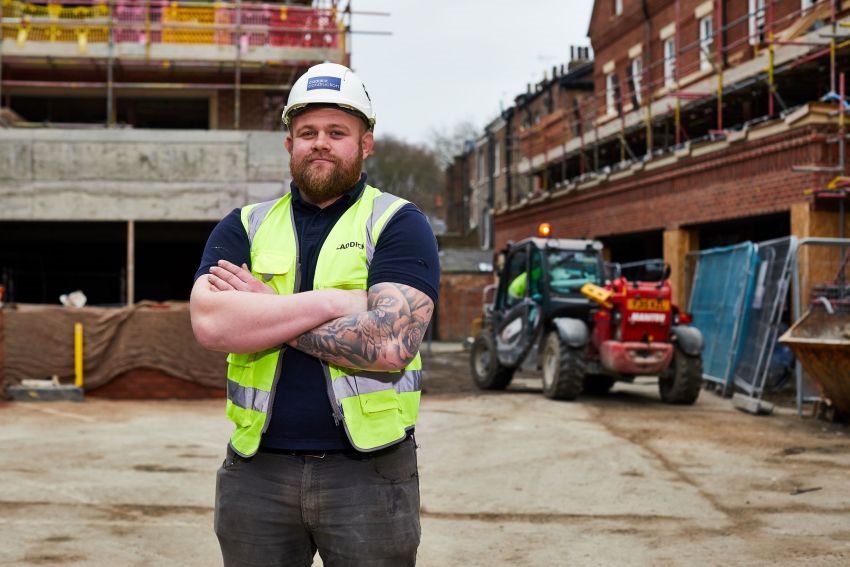 Former RU prop Lee Imiolek has swapped rugby shirts at Yorkshire Carnegie for a hi-vis vest as he launches a new career at Caddick Construction.

As one of the latest trainee site managers at the Yorkshire-based Group, 28-year-old Lee is happy to trade old skills on the pitch for new ones in construction after a recurring back injury forced his early retirement.

Lee had enjoyed a stellar career in Rugby Union. As a Loosehead Prop he was signed and debuted as a teenager with Premiership side Sale Sharks before transferring to Leeds Carnegie RU four years later. He made 120 appearances for the club and has played for England’s U16’s, U18’s and in the U20’s World Cup during his career.

When doctors warned Lee he risked permanent damage to his back if he continued playing, he reluctantly hung up the No 1 shirt and took stock, aged just 27.

“I had a young family and so I couldn’t risk continuing with rugby, but I knew I didn’t want a desk job stuck inside either,” he explained. “I did a lot of research and construction really appealed to me.”

Caddick’s Operations Director Ian Plowman agreed: “When Lee applied for a job he showed initiative and demonstrated that he had a real interest in construction. He has been a great addition and his sporting background just adds new strengths to the site management team.

“Whilst Lee’s skills on the pitch don’t seem an obvious fit for construction, he had a lot of qualities that could be transferred from Yorkshire Carnegie to elsewhere within the Group. He is obviously a team player, dedicated, and isn’t afraid of hard work or learning new skills.”

Lee is currently working on the Clifford Street Fire Station development in York. He added: “I love my job, I’m outdoors all day but being out in the elements has never bothered me. I’m learning new skills all the time in terms of planning and team management. It’s challenging but the best move I could have made.”

When not working Lee still keeps his love of rugby alive by coaching two local junior rugby teams near where he lives with his wife and three children in Halifax.