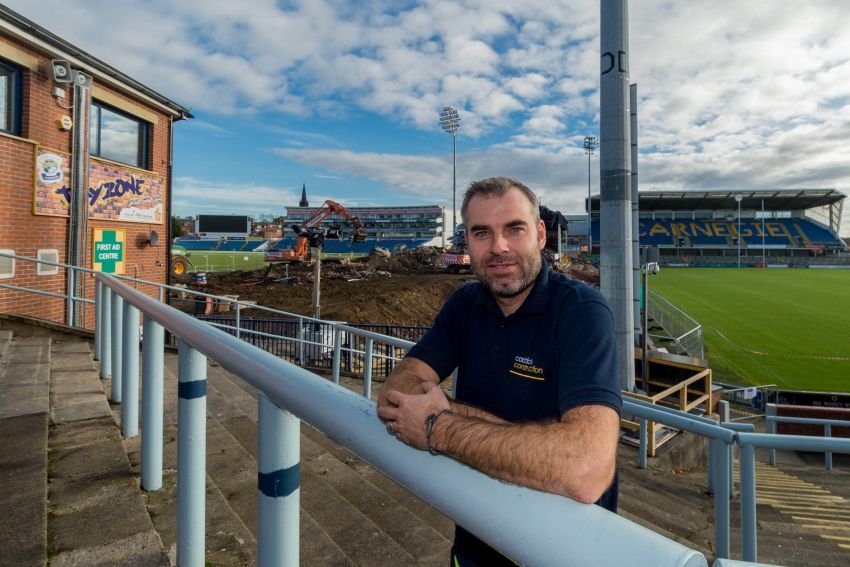 Pitts is project manager for Caddick Construction, who are rebuilding Emerald Headingley in a massive £40m revamp.

Demolition and removal of Rhinos’ iconic South Stand has been completed and work on the steelwork for the new structure will begin on Monday.

The main stand, shared with Yorkshire County Cricket Club, has been partially razed and remodelling of the pavilion is also underway.

The project began in August and is due to be completed in 2019. A temporary North Stand will be in place next year and some standing will be available on the other side of the ground.

“The South Stand is completely demolished, the foundations are going in and we’ll start the new steel work on Monday,” Pitts confirmed.

“That is quite significant. We’ll start at the eastern end, next to the Carnegie Stand and work towards the Western Terrace.”

The main stand remained open until Rhinos’ final home game of last season, in September, but rapid progress has been made since then.

Pitts added: “There’s three or four weeks left of demolition. Only the extreme eastern end of the stand is left standing, the rest is a pile of rubble or fully cleared.

“The next thing is, on the site of the north stand there’s a large, deep Yorkshire Water sewer which runs under the stadium and we have got that to replace, starting on Monday for four weeks.

“Then we will clear the site, dig the foundations and in late February/early March we’ll start the steelwork on that side.

“We’ve also got the temporary stand to install and that will be ready for the first home game.

There are three parts to the scheme, which will preserve Test match cricket in Leeds and is designed to provide state-of-the-art facilities for rugby fans and sponsors.

Like all construction, the development - currently involving around 50-60 workers, which is set to rise to more than 200 during its peak - is dependent on the weather.

“If it’s driving rain you can keep working, but it’s not great for the guys,” Pitts said. “If it is minus temperatures you can’t pour concrete and if it’s blowing a gale you can’t use cranes.