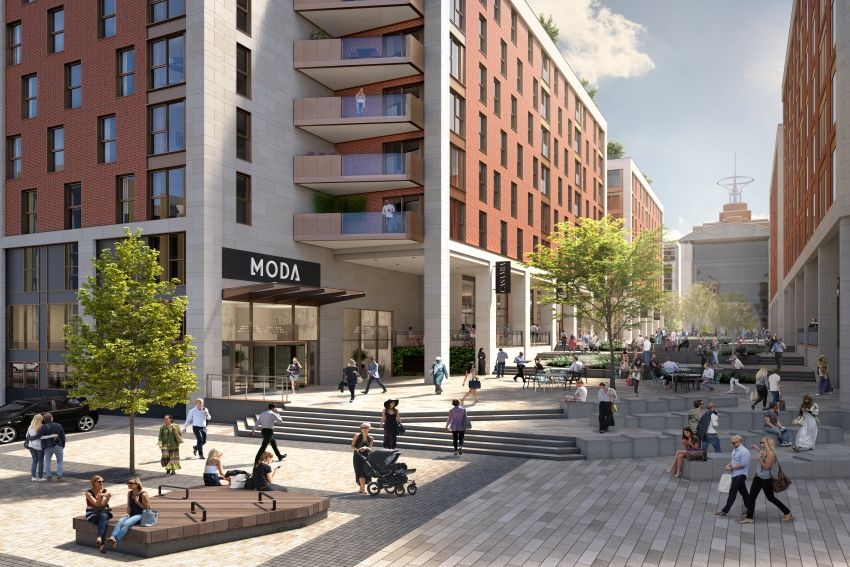 Moda Living, a leading developer, owner, and operator of homes for rent has appointed sister company Caddick Construction to deliver 515 homes designed exclusively for rent in Leeds city centre, with start on-site due in October this year.

Designed by award-winning DLG Architects, the rental homes will be spread across two C-shaped 16-storey blocks, with a new public courtyard in between the buildings and rooftop terraces overlooking the city centre. Two commercial units will also be delivered at ground floor.

Named New York Square after nearby New York Road and a nod to its synergy with performing arts and culture, the build-to-rent development will also host a range of on-site amenities, such as shared lounges, flexible workspaces, a cycle hub, and health and wellbeing facilities, with access to everything included in the rent.

Services include 24-hour hotel-style concierge and round-the-clock professional management, while the bespoke MyModa app will enable residents to report maintenance issues, communicate with the concierge, book events, and acts as the apartment key.

Together with Apache Capital Partners, Moda has a pipeline of over 7,500 rental homes in eight cities across England and Scotland. Other Moda projects under construction or complete include flagship Angel Gardens in Manchester, The Mercian in Birmingham, the city’s tallest consented residential tower, and The Lexington in Liverpool, a 35-storey, 325-home tower.

Build-to-rent - known as multifamily housing in the US - is popular in North America, where it has been around for decades but has only started to take off in the UK. Cities like London, Manchester, and Birmingham have all seen a lot of build-to-rent activity and New York Square will be one of the first, high-quality build-to-rent schemes in Leeds.

The homes at New York Square, where Moda will develop and operate the buildings for the long term, will be a mix of studio, one, two and three-bedroom apartments. A unique two-bed sharer layout will provide the perfect solution for sharers – two equally-sized bedrooms, with en-suites on either side of shared living space, allowing for greater privacy, reduced noise and no arguing over who gets the biggest room.

The development forms a key part of the new £300m SOYO neighbourhood being delivered by Caddick Developments, another sister company of Moda Living.

In addition to the 515 Moda rental homes, SOYO will include a new hotel, bars, restaurants, further residential, a multi‑storey car park as well as high-quality public realm and open green spaces, The West Yorkshire Playhouse has also recently completed an extensive refurbishment.

Caddick Construction is also building Moda’s flagship Angel Gardens project, a 35-storey, 466-home tower in central Manchester close to where Amazon is opening its first UK HQ outside of London. Moda will welcome the first residents to Angel Gardens in October this year.

Caddick Construction, Caddick Developments, and Moda Living are all part of the Yorkshire-based family-run Caddick Group, which reported a record turnover of over £200m this year.

Johnny Caddick, managing director at Moda Living and director at Caddick Group says: “This is a real group-wide effort and demonstrates Caddick’s cross-sector strengths in both property development and construction as well as underlining our ability to deliver institutional-grade assets.”

“New York Square marks the first phase of SOYO, which will regenerate a car park into a new and exciting city centre neighbourhood. Moda’s aim is to raise the bar for rental in the city, creating high-quality homes and strengthening the appeal of city centre living for all.

Martin Farrington, director of City Development for Leeds City Council said: “On the back of the new City College and refurbished Leeds Playhouse, it’s fantastic to see Moda bringing their residential development forward. This is a real statement of confidence in Leeds and a further boost to the city.  Since 2013 Leeds has delivered more new housing than any other Core City in England and the start of Moda’s scheme will help to ensure that we continue to meet our housing targets and support the development of a thriving cultural neighbourhood.”

Roger Marsh OBE, Chair of Leeds City Region Enterprise Partnership and NP11 said: “I am delighted that the first phase of Caddick Developments multi-million-pound SOYO scheme will start later on this year with the construction of these city centre apartments.”

“With a dynamic economy, vibrant urban hubs and outstanding standard of living, the creation of high-quality housing is key ensuring that Leeds City Region is not just best for business but best for lifestyle and for talent.”

“This development highlights the confidence and momentum of investment into Leeds city centre and the wider Leeds City Region.”